Rafael Herguedas presented at CASE2019 the work entitled “Multi-camera coverage of deformable contour shapes”, which was coauthored by Gonzalo López-Nicolás and Carlos Sagüés. The conference was held on August 22-26, 2019, Vancouver, BC, Canada. 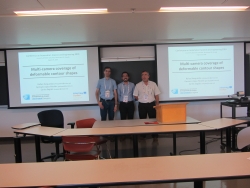 Abstract: Perception of deformation is a key problem when dealing with autonomous manipulation of deformable objects. Particularly, this work is motivated by tasks where the manipulated object follows a prescribed known deformation with the goal of performing a desired coverage of the object’s contour along its deformation. The main contribution is a simple yet effective novel perception system in which a team of robots equipped with limited field-of-view cameras covers the object’s contour according to a prescribed visibility objective. In order to define a feasible visibility objective, we propose a new method for obtaining the maximum achievable visibility of a contour from a circumference around its centroid. Then, we define a constrained optimization problem and we solve it iteratively to compute the minimum number of cameras and their near optimal positions around the object that guarantee the visibility objective, over the entire deformation process.