Miguel Aranda presented at ICRA2019 the work entitled “Deformation-Based Shape Control with a Multirobot System”, which was coauthored by Juan Antonio Corrales and Youcef Mezouar. The conference was held on May 20-24, 2019 Montreal, Canada. 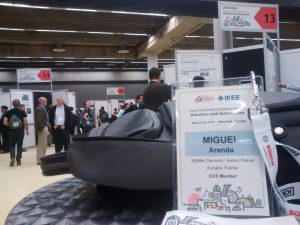 Abstract: We present a novel method to control the relative positions of the members of a robotic team. The application scenario we consider is the cooperative manipulation of a deformable object in 2D space. A typical goal in this kind of scenario is to minimize the deformation of the object with respect to a desired state. Our contribution, then, is to use a global measure of deformation directly in the feedback loop. In particular, the robot motions are based on the descent along the gradient of a metric that expresses the difference between the team’s current configuration and its desired shape. Crucially, the resulting multirobot controller has a simple expression and is inexpensive to compute, and the approach lends itself to analysis of both the transient and asymptotic dynamics of the system. This analysis reveals a number of properties that are interesting for a manipulation task: fundamental geometric parameters of the team (size, orientation, centroid, and distances between robots) can be suitably steered or bounded. We describe different policies within the proposed deformation-based control framework that produce useful team behaviors. We illustrate the methodology with computer simulations.