Different students have presented their final degree projects in the framework of COMMANDIA:

“Robotic manipulation in the Robotic Operating System” by Inazio Gracia. 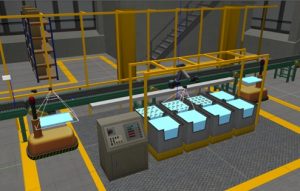 Several simulations are performed with an ABB robot model IRB 120 and serve as an explanation of how to perform motion planning in a simulation environment. They describe the different methods for moving a robotic manipulator in a scenario. Since normally in industries several robots work simultaneously in work cells, one of the methods of motion planning has been applied to a multi-robot case. Finally, two manipulation tasks are developed with Universal Robots’ collaborative robots, more specifically the model UR5. Each task is defined in a different scenario and is performed with two different tools, a robotic gripper and a vacuum tool.

“Simulation of mobile robots in Gazebo for transport and manipulation tasks” by Gloria del Olmo. 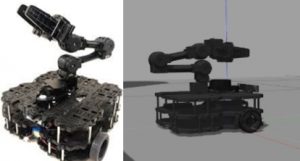 This work has focused on the TurtleBot 3 mobile base, the OpenManipulator robotic arm and the union of both. The set of software, libraries and ROS packages associated with these robots have been used to carry out the task. First of all, the ROS working environment and some of the possibilities it offers have been studied. Then, we have explained and extended the functionalities that ROS offers for the TurtleBot 3 platforms and the OpenManipulator robotic arm, and analyzed them to work in a coordinated way.